LEA9 - The Lull by Starla Metaller 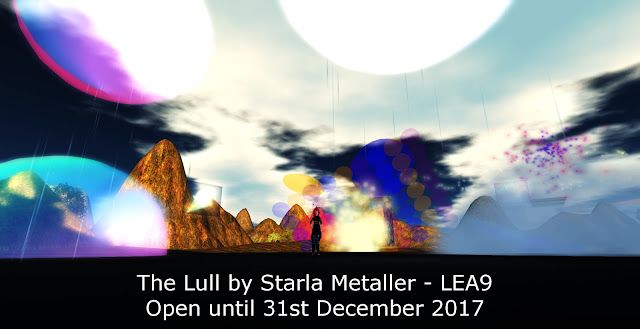 The focus of the work is an installation which comprises particle effects to create the impression of fog and flickering transparent coloured shapes to mimic projections, together with a representation of a projector and beam.  The audio emanates from the centre of a transparent object placed around ‘chest height’ on an average avatar, allowing for a degree of variation in the sound levels, sounding louder close to the centre of the installation, and quieter towards the edges of the space.

The Lull is also a gallery space in which works exploring the use of colour, light and material properties are displayed alongside an studio area showing early versions of objects which were created as part of the development of the installation.

You are invited to discover The Lull – An immersive gallery and installation space – officially open from Monday 4th December until Sunday 31st December.
Posted by PatriciaAnne Daviau at 9:52 AM