The Cosmogony of Rafts and other improbable floating beings. 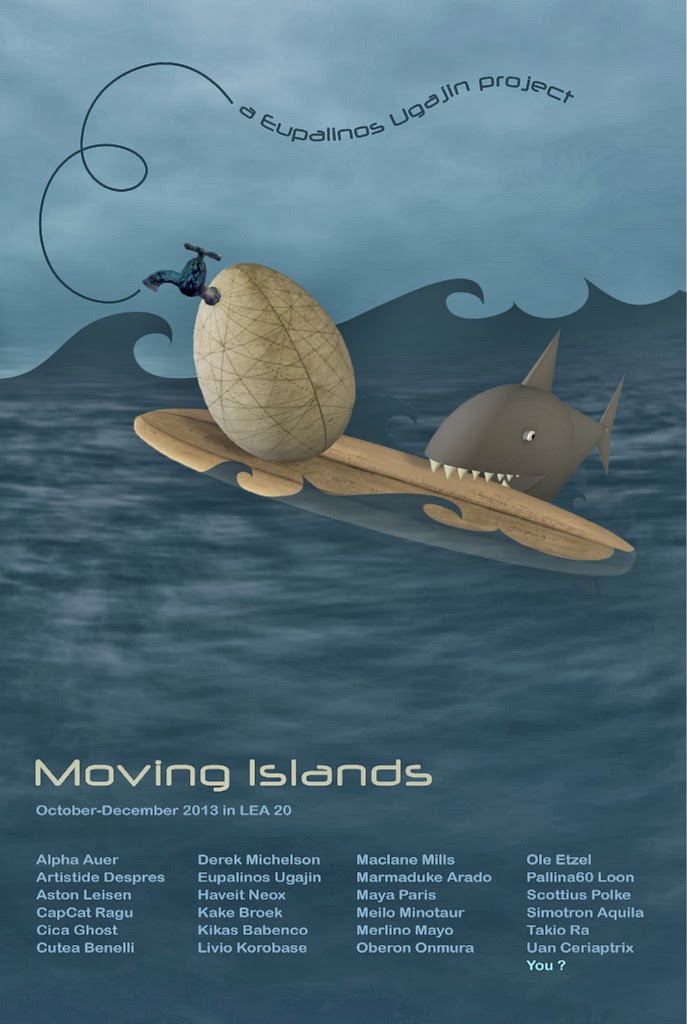 "Moving Islands" [Rafts] is a collective project  with:

● Haveit Neox - http://accalpha.blogspot.com/
Title: The "Mythic Raft"
by Haveit Neox (and his building alt: 12thNight)
Description:
The only way to insure the thorough destruction of the planet, is to let human history take its course. The myths and faith of societies become their directives and arms.
A raft survives the big flood after the polar ice caps had melted. No landmasses were high enough to poke through the new ocean. The Earth had been stretched beyond its limits – pulled apart at the seams. When it snapped, the scattered people swam to board the raft for the last myth.

For the Fishes under the water: fly and then send you in a bubble, stand and they fight you, sit on the ground and hmm...they want to marry you.

● Simotron Aquila - http://www.flickr.com/photos/simotron/
"Charm" by Simotron Aquila
(for Eupalinos Ugajin Project "Moving Islands" - October-December 2013, LEA 20)
Siren song... something considered alluring or fascinating but also dangerous in some way, something capable of attracting us and influencing our actions like advertising and propaganda communication do.
I've imagined an orchestra of persuasive images that, playing a fetish perfect world, lures us, unwary sailors, onto rocks.
https://www.facebook.com/simotron.aquila
http://www.myspace.com/spacesimo

●Uan Ceriaptrix - http://www.flickr.com/photos/uanguz/
Title of my raft: "A walnut family tree raft"
for the "Moving Islands" [Rafts] collective project by Eupalinos Ugajin
made with Blender 2.68a , GIMP 2.82 and the SecondLife© build editor in October 2013
Inspired after a  brainstorming and the integration of concepts with the team.
My vision was:
*Pangaea, the Permic continent and the continental drift
*Hans Christian Andersen tale, Tommelise flight in a nutshell
*Hieronymus Bosch, "La nave de los locos" (ship of fools)
*Iconic marine characters: Fregata magnificens (a loyal fellow traveler) and any teleost fish (the powerful engine of the raft, who seduced by the bone, the system generates a front-wheel drive to the raft)
* The light, our eyes as sea travelers.
*Theophile Gautier, french poet who said: "Nous sommes le desir des aïeuls" (we are the desir of grandparents), by what I said intellectual tradition of explorers, scientists and artists.
My blog: http://www.xochitecpancalli.com

The installation is open now, but still in progress and not yet finished, You might want to come back later.

▨ Some photos if you need for your blog posts (I will add more builds to this folder):  https://www.dropbox.com/sh/bh8uoauhzoxjb06/onC98opRrW

PS: the tracks in the audio stream is a selection of music I like.