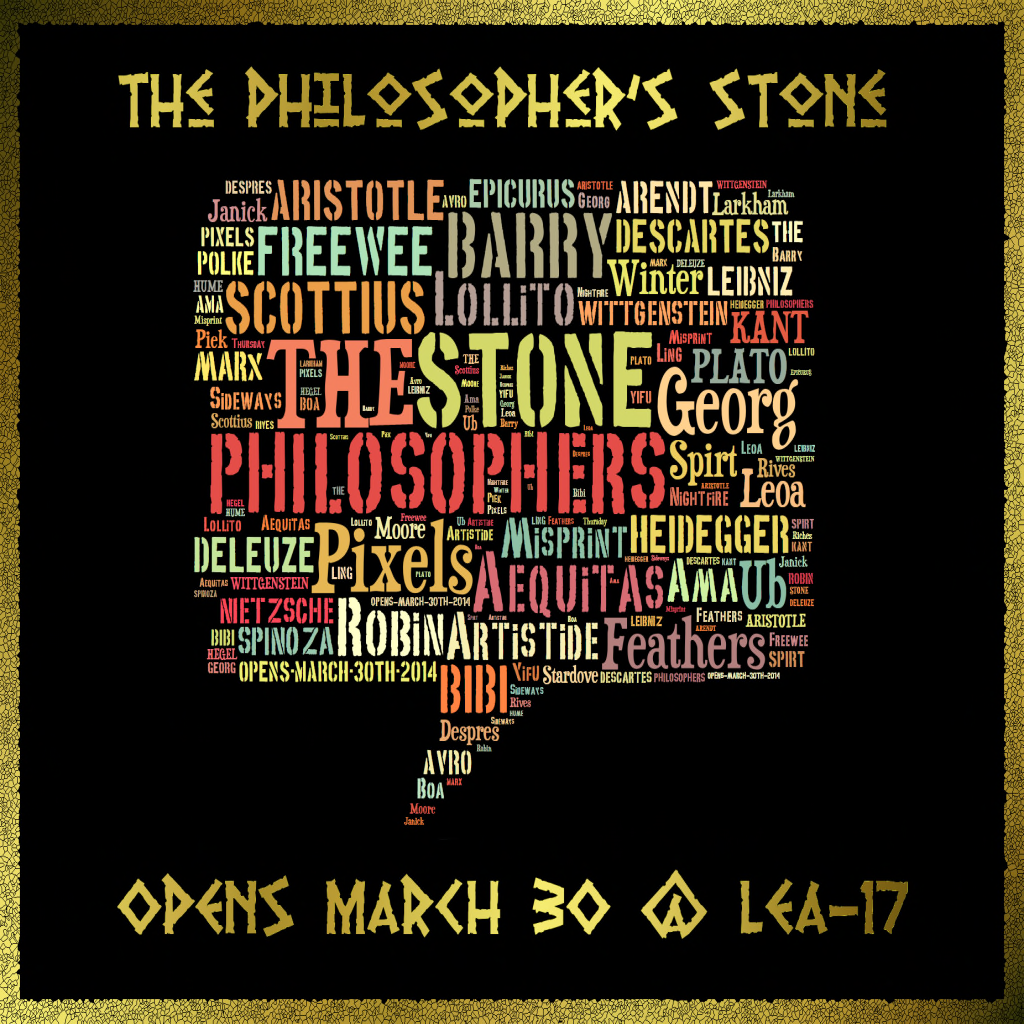 The Philosopher's Stone is a Caerleon Artist Collective project and in that light, we strive to create art exhibitions that are thought provoking, fun, entertaining and educational.   We encourage collaboration, sharing of knowledge, exploring ideas and experimenting with various techniques and technologies.   We welcome both seasoned and novice artists.  We are a non-profit organization that has been active in promoting art and education in Second Life since February 2008 and we have produced many large and smaller scale art exhibitions including simultaneous events in Second Life and real world art venues.

The idea for the "Philosophy Project" -- its working title -- began in 2013 when I saw an article online about a project a teacher had given his young students -- to draw what they thought a philosopher looked like.  The results were quite funny.  I sent the web link to Georg Janick (Gary Zabel, Professor of Philosophy at University of Massachusetts) and mentioned doing an exhibition in Second Life about philosophy.  We came up with the idea of having a group of artists "interpret" a philosopher/philosophy.

I asked Georg if he would put a list together of his top 20 philosophers.  We then cut the list to 15 and I began working on the sim layout / concept for the project shortly after we applied for an LEA grant hoping we might be selected.  When we got word that we would receive an LEA land grant, I began work on terraforming the ground and layout of the floating islands, etc, and also began inviting artists.

To make the project a bit more interesting and throw in a little bit of cosmic dust, I placed the names of the 15 philosophers into a bag and as each artist committed to the project, I'd pull out the name of a philosopher.  The randomly chosen assignments seem to pair up perfectly with each artist.

As often happens, people jump on board to participate then circumstances change and they have to drop out.  We had a few changes during the build phase and pushed our opening date a couple of times to accommodate these changes and my snail's pace building on the ground below.  We wound up with a wonderful group of artists -- some exhibiting for the first time and some who are well known for their work in Second Life and other virtual world spaces.

The overall concept for the exhibition focuses on two large figures at the center of a pastoral setting -- male and female -- who are  suspended between the corporeal / material plane of earth while being lifted upward from their base existence toward philosophical ideas.   The figures are bound to The Philosopher's Stone -- the sought after alchemy to create gold -- the ultimate materialism.    Above, floating islands attached by ephemeral chains to circular rings connect the figures to the non-material -- thoughts, ponderings, musings, ideals and philosophies that seek to define human existence, behavior, imagination, spirituality, politics and so on.

It is on the floating islands where visitors discover the artists' 3D interpretations of 15 philosophers and in a gallery on the ground level, the same artists' 2D "flat art" interpretations.

On the ground below (which is where visitors first land), there are several places to explore that cover general ideas such as the Philosophy of Love, The Sisyphus Challenge (The Philosophy of Struggle), Philosophy of Media and Politics and other installations I created.   Most of the work on the ground is interactive and connects visitors to websites for additional information and further study.  The ground also features an amphitheatre for planned events and a School of Philosophy that features various interactive content.

Some of the work on the ground is still evolving and additional content will be added during the run of the exhibition.
Many thanks to Georg Janick and to all the artist who participated and created the the wonderful installations and artworks.

And thanks to our hall monitor, PatriciaAnne Daviau, and to Linden Labs and the LEA peeps for the Linden Endowment of the Arts land grant.

Thank you for visiting The Philosopher's Stone.  We hope you enjoy our work.


Posted by PatriciaAnne Daviau at 1:07 PM