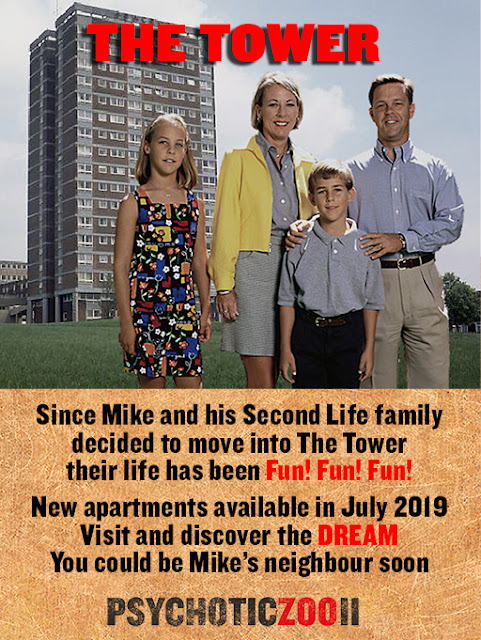 'THERE IS ONLY ONE RULE - OBEY!'
Entropy - it exists in all systems. The East Germans in Berlin covered the grassed areas of the high-rise estates with concrete, because children played ball on them, and adults walked on them, 'DO NOT WALK ON THE GRASS'. Floor thirteen - There is only one rule - OBEY!

At 14.00 (SLT), on 4 July 2009, Dekka Raymaker first exhibited 'Psychotic Zoo', curated by Helfe Ihnen, at Odyssey NE on the Odyssey sim in Second Life (SL).
At that time Raymaker said "Psychotic Zoo can represent many things, an institution, a company, a mind (it's all in my head). What goes on in  here is determined by many different and contrating factors, by an individual or by a committee." 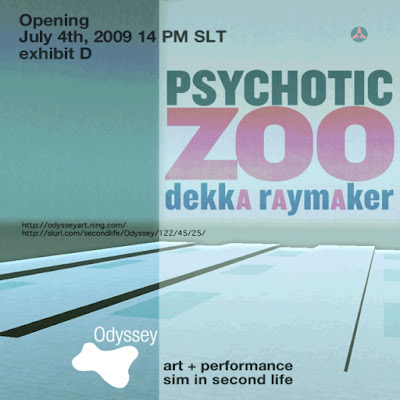 Poster for the original Psychotic Zoo, 2009

At 14.00 (SLT), on 5 July 2019, Dekka Raymaker invites you explore THE TOWER - Psychotic Zoo II at LEA7, on a Linden Endowment of the Arts sim in Second Life. This is an interactive experience for the avatar, there will be 'Light', 'Sound' and 'Action' the art only exists in conjuncture with the avatar, the avatar has to be there to touch stuff, chairs, buttons, boxes and 'Cranes'. Art on Second Life (everything on SL) could be like Schrodinger's Cat, "Is it dead or alive when your not there?"
In one room someone asks "is the skeleton a dead person?" the reply "no it is a skeleton manufactured from single use plastic", then they say, "oh! I am glad it is plastic and not a real dead person", someone else then says "how real can a dead person be in Second Life?" 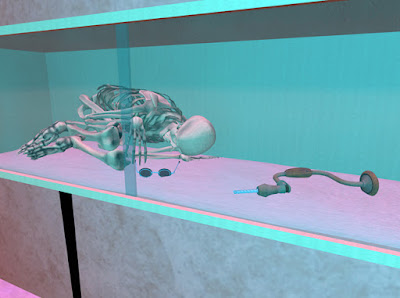 Skeleton in vitrine: It is a dead human being, stripped of all their identity and displayed like a taxidermy animal would be in Real Life.

Raymaker took a short break from SL late 2011, that short break lasted an unintended six years, he returned in September 2017. All the art installations that he had previously made in SL were still there waiting for him, in the folder 'Dekka's Art'. He placed some of it out, in part to remember what he had done, and in part to enjoy seeing it again. Within two weeks that folder was gone, non-existent, poof! Four years of work had become 'missing inventory'. Entropy in SL.
So one of the first new works he created was 'Dekka Raymaker's Lost Inventory Cog' (shown in the storeroom, ground floor, the Tower). 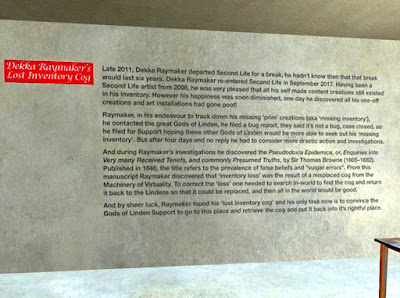 Transcript of Raymaker's progress of finding his 'lost inventory' prims.

And by sheer luck, Raymaker found his ‘lost inventory cog’ and his only task now is to convince the Gods of Linden Support to go to this landmark and retrieve the cog and put it back into it’s rightful place . . . 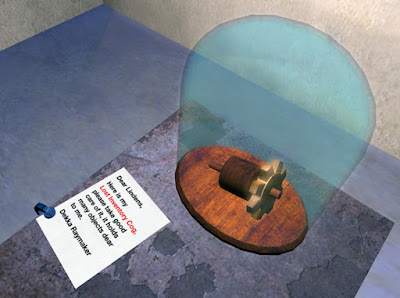 . . . but they didn't.
The Tower is a construct (ideas of various conceptual elements, subjective and not based on any empirical evidence) or it could represent his mind, all those little compartments filled with art (at least 34 in the Tower alone), but I guess there is no proof it exists, even though Raymaker says 'it's all in my head'. The Tower is an installation piece, work also exists on the surrounding sim. The works seen here are a combination of original artworks rebuilt, and in most cases reimagined, together with new works and ideas.
There are loose themes running through the art; entropy, disorder, control, censorship, fear, anxiety, and a story of a young man who builds a 'time machine'. 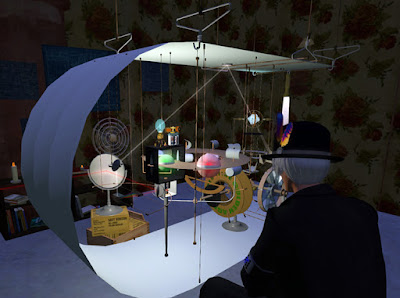 The 'Space Dimensional Drift Converter' in Apt. 63, floor 15, was originally part of an installation called 'We Are Not In The World', it was one of Raymaker's larger works before his break. The installation was part inspired by a Arthur Rimbaud quote "What a life! True Life is elsewhere. We are not in the world." A story in part about Raymaker's journey, exploration and discovery. The original build had a story as a starting point to help you explore the space, "this piece is about a man who one day wakes up and decides to investigate how he can leave the world he inhabits for a better one . . ."
For the Tower, Raymaker runs with this theme and although this is also a story about a journey, exploration and discovery, it occurs in a different way entirely. This room is the 'hub' of the Tower, let the story unfold, but do not forget, you're in a loop, so the story as already begun, but is also yet to begin. (But, this story isn't complete, yet). 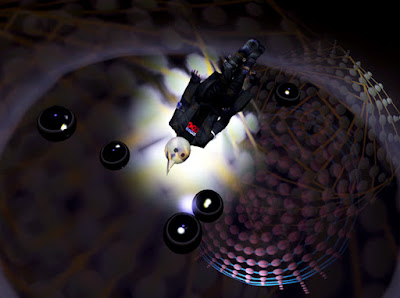 
Raymaker's main points of references in his early art was concerning the new 'adult content' policy and Linden Lab's (LL) attempt to control and censor art, for at that time Linden Labs had a new found fear of nipples. As an artist he was interested in seeing how this effected how and where artists in SL show work, and if it would determine that artists self censor themselves. These ideas reflected in his work on floor 12, Forbidden, Apt. 50 and Content Solution Agenda Hidden, Apt. 51. 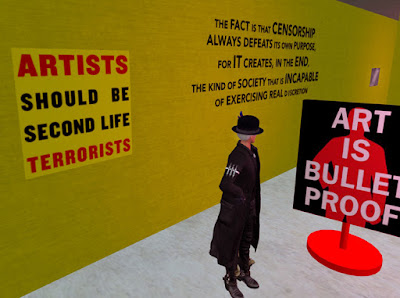 Artist Should Be SL Terrorists.

In his work Raymaker has used objects as symbolism, the apple represents sex, (the forbidden fruit,) and the blade represents segregation/castration. In his early 20s on a trip home from college, the Raymaker family photographs came out . . . and there were baby pictures of himself laid down naked, and the unusual thing about these photographs was that his mother had cut the bottom half off, where his penis had been. Castration, a form of censorship. 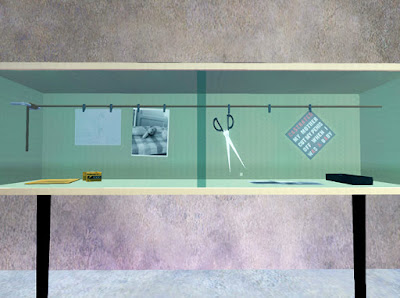 
In early 2010, Raymaker had conversations with M Linden, CEO of Linden Lab at that time. Raymaker thought it was a good idea to encourage artists in SL to give permissions to archive classic artworks, to catalogue them for future reference, and promote artists work outside of Second Life. Later that year, M Linden introduced the Linden Endowment for the Arts (LEA) to the SL community, different to what Raymaker had envisaged, but nevertheless, an improvement for art in SL. Raymaker became one of the original committee members in June 2010 but left the LEA late 2011 to have his six-year break.
Later work by Raymaker is about how society controls us from birth, bringing real life concerns into SL, 'what school we go to, determines in part, what job we get when we leave', and remembering the LL's classic 'wording' defense of the Adult Content policy "Implementing restrictions to give residents more control over their Second Life experiences", yeah, yeah! 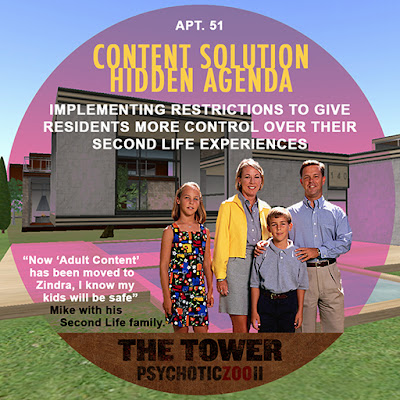 Part of Raymaker's advertising paraphernalia for The Tower. 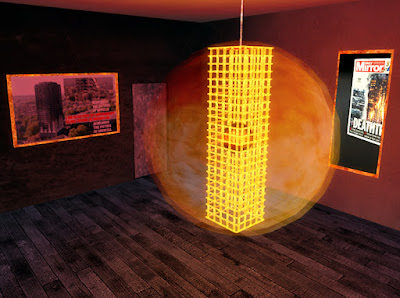 Other socio-political works in the Tower are 'Deathtrap (Flat 16, Fourth Floor)'. In June 2017, a fire broke out in the 24-storey Grenfell Tower block of flats in London; it caused 72 deaths. More than 70 others were injured and 223 people escaped. It was the worst UK residential fire since the Second World War. Police and fire services believe the fire was started by a malfunctioning fridge-freezer in flat 16, on the fourth floor.
It has been suggested that building safety rules have been so relaxed for the benefit of big building firms, that the safety of people living in some buildings is secondary to profit. The rapid spread of the fire has been attributed to the building's exterior cladding, a type in widespread use. 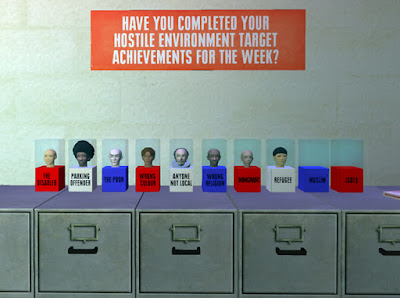 Little 'Xenophobic' Britain. This work relates to the UK and the Tory Government's Immigration Policy from 2010 to the present day. Whilst Theresa May was Home Secretary, she introduced the UK Home Office 'Hostile Environment Policy', measures designed to make staying in the UK as difficult as possible. In the work, there is also a dig at the horrendous situation the UK now finds itself in, with BREXIT.
The 'Hostile Environment Policy', had a personal effect on Raymaker's wife, and partner in SL, Penumbra Carter. The application for 'fiancée license' and 'leave to remain', to get married and live in the UK was initially 'Rejected' on the grounds that, the HM Revenue & Customs wasn't able to send a document to confirm his income in time for the evaluation, and even though this was sent four days later, it was 'late' and the Home Office wouldn't accept it. Raymaker & Carter appealed and after a further nine months, the Judge said that the Home Office decision was without reason. They won the appeal. 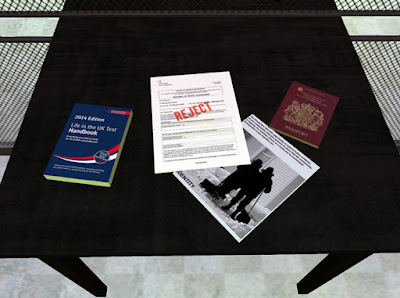 When Carter entered the UK with her fiancée license, Border Force Agency kept her in a room, whilst they interrogated her and read every document she was carrying, even questioning the illustrations she had in her sketch book, they were particularly interested in the sketches she had of atomic molecules. They provided her with sandwiches and tea, and she was allowed to watch "Homes Under the Hammer" on TV. They eventually let her enter the UK six hours later. 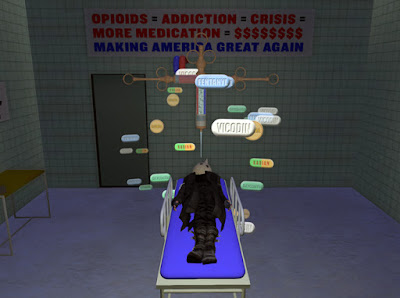 Profit In Profit Out

Dekka Raymaker is a 'retro prim' builder, so the majority of the build is prim built. Mesh has been used sparingly and mainly for moving parts, as well as for trees, flowers and animals supplied by other SL designers. 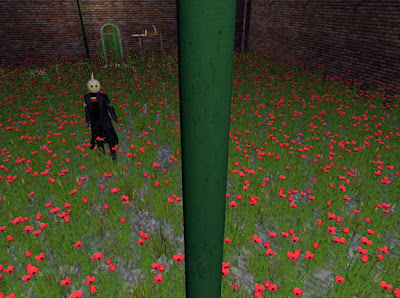 You Are The Dead 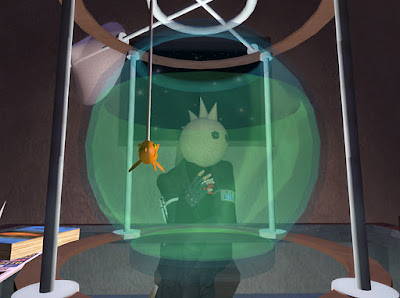 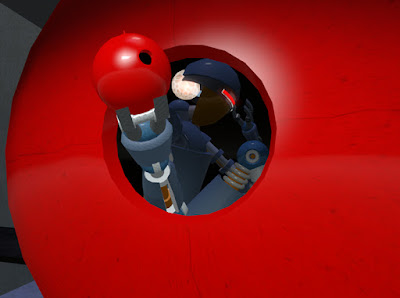 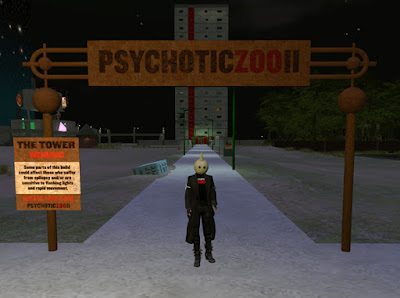 Posted by PatriciaAnne Daviau at 8:29 AM