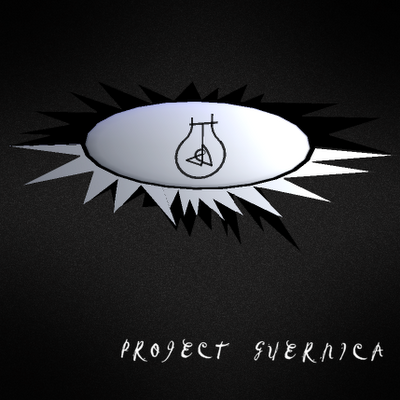 London Junkers & Lizzie Gudkov take over at LEA 6 for the NOVEMBER ROUND of the LEA FULL SIM ART SERIES (here for full year schedule), bringing back yesteryear with "PROJECT GUERNICA".

IN LONDON'S WORDS:
In 1937 Spanish painter Pablo Picasso created one of the most important icons of the 20th century when he made the Guernica.

Painted in black and white, depicting the horrors of war, it is today as solid and modern as it was when it was first shown in the 1937 International Fair in Paris. T

he intention of re-creating this masterpiece in Second Life comes from the love for the original mural itself and what it represents. After a lot of thought and experimenting with external 3d software,a decision was made, this installation would be built primarily in prims, as an exercise of the possibilities that LEA has given us. With this piece, we would like to pay homage to Picasso and let visitors learn more from it.
Posted by Jegatheva at 1:11 PM