OPENING SATURDAY, MAY 12TH, 2PM SLT
UPDATE: Due to unforeseen circumstances, Skye Galaxy will play for us tomorrow, Sunday, at 3pm. Today we will open with DJ Walt Vieria. Less lag, more art! 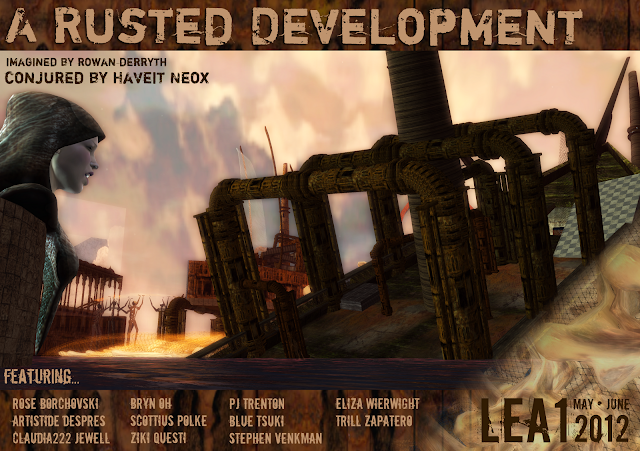 I was very honoured, not too long ago, to be given the opportunity to curate a full-sim exhibit at the LEA as part of their guest curator initiative. The theme for this installation is inspired by my own virtual art collection, which I realised recently is full of rusty, steamy, cogged and vintage-inspired works. I do not fully participate in the virtual Steampunk communities, but it is an aesthetic I very much enjoy, particularly for the way in which it engages with contemporary anxieties over time and place by embracing anachronisms and an imagined past. These themes relate to my academic research interests in 19th century art and design, alongside those of urban renewal, and dystopic/utopic narratives.

As such, I envisioned an installation where there exists a main build – a ‘development’ – that has fallen into ruin. It is subsequently rescued and repopulated by a selection of artists whose work loosely embraces similar themes.


The first and perhaps biggest hurdle was, of course, the overall build itself. I knew I had to find someone who could make something that would not only suit this rusty theme, but also have the incredibly rare trait of being an immersive builder who was open enough to have other artists come in and add their work to theirs, with the possibility of it not being a perfect fit. And in that, there was one very clear candidate for me.

One of the things that impressed me about Haveit’s amazing work ‘Second Libations’ was that not only was it an incredible build with a full, narrative backstory, but he had also solicited stories from others to include in his work. Also, I knew Haveit to be one of the warmest, most down-to-earth (and least fussy!) artists I’ve ever met, in any world. His is a natural collaborative spirit, so I asked him to be my mastermind, and was thrilled when he accepted.
I suppose I shouldn’t have been too surprised when, less that two days later, he had come to me with his own story of my idea, taking it far beyond my own imaginings. From Haveit-

Rowan Derryth truly surprised me with an invitation to build a sim for an exhibit. Her idea was to present a rusted environment that spoke of an abandoned city: a place where artists would come to revitalize it. I was immediately hooked by the idea and very excited because a passion of mine is constructing cities. Expanding on Rowan’s premise, I wrote a background story to give it a history:

The fabled merchant city that rode atop the back of a gigantic whale met with a calamity that ended its existence abruptly. In the middle of the ocean, a horrific storm caused two huge ships carrying toxic chemicals to collide into the swimming whale city. The whale and all the populace died in the flood of chemicals that saturated the waves.

The whale turned to bones, and the city to rust, it was nearly half a century before this city adrift was discovered. An expedition of artists, searching for land to build an art colony, came upon the decomposing city. With the intent to regenerate the place, they set to work by first towing to safe harbor the floating mass. Each artist then undertook their vision. The empty shell of the city suddenly filled in and expanded as each artist found their niche in the Rusted Development. No longer at the mercy of invisibility, the city humbles its rusted façade to the highlights of the art within. 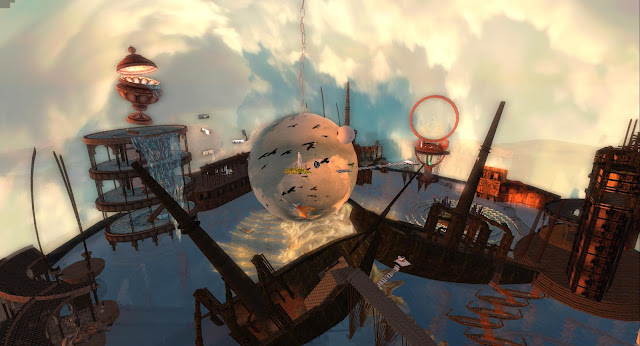 With Haveit’s vision coming together, it was then up to me to rally the other artists who have contributed. I of course wanted a selection of work that would suit the build, but I was also interested in pushing collaborative boundaries, juxtaposing the work of those you might not normally see together.

In particular, I wanted to combine the work of those who traditionally work on their own immersive builds, with the work of some of my favourite virtual photographers. And I must give an extra kudos to all: to the immersive builders – for some it was a huge step out of their comfort zone to contribute to something that they saw as wholly built already; and to the photographers, who each stepped out of the ’2D’ realm to make their artworks that float, fall, and become part of the environment in a dynamic way.


I applaud them all for taking the risk. It is also a credit to Haveit that some of the very finest jumped at the chance to be part of this work. My deepest thanks go to our ‘Rusted Artists’: