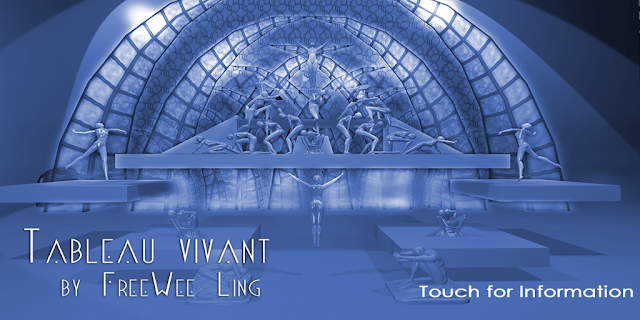 "Tableau vivant" is ultimately about gesture -- capturing a dramatic moment -- but a moment without context or meaning, freely interpreted by the viewer. While this is a static piece, there are options for the viewer to interact with it and to become a part of it. All of the figures are scripted with the pose animations, so viewers can replace any one of them with their own bodies.

Additionally, the staging can be altered by anyone in various ways using a central control panel at the front of the stage. Adjustments include:

-- Lighting controls to set the color and/or ambient brightness of the lights.
-- Lighting colors may optionally be set to change randomly at 5 second intervals.
-- A particle shower emanating from the upper center figure can be toggled on or off.
-- A solid color stage (background panel and floor) can be set to appear or disappear.
-- The solid stage background can be moved forward to optionally cover the background scaffolding superstructure, giving a less complicated image.

This piece is inspired by the theatrical performance piece, "Tableau Vivant of The Delirium Constructions", by Sarah Small. There is an amazing video available on her website at: http://www.sarahsmall.com/tableau-vivant

The conception of my tableau was also inspired by the choreography of Twyla Tharp. Tharp often has her dancers in close contact, climbing over and under each other. I was hoping to capture some of the gestural thrust and energy of her dancers, without being a literal interpretation of any particular piece.