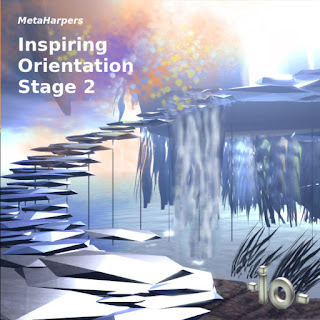 The Inspiring Orientation, on sim LEA21, is an ambitious attempt to simultaneously introduce SL's creative possibilities and basic viewer skills. It's aimed at newcomers from multiple language groups around the world.

In a previous LEA artist residency we developed basic artistic scenes to demonstrate viewer orientation concepts such as "Walk", "Jump", "Fly", "Chat", "Use Camera", and "Sit". The exhibit has attracted over 9,000 visitors so far. More information can be found at http://www.metaharpers.net/inspiring-orientation/

In this new effort we've continued expanding and refining the previous exhibit, while at the same time bringing in additional artists and scenes. This effort, "Inspiring Orientation Stage 2", introduces a redesigned portal area which takes advantage of media-on-a-prim capabilities to bring the "Linden Lab Destinations Guide" in world as objects which can be clicked.

After the LEA artist residency, we'll move the projects that have been created here to a permanent exhibit which can continue to evolve and improve, and hopefully encourage a crop of new visitors to stretch their artistic energies.